Master of the Moor

Murder Being once Done 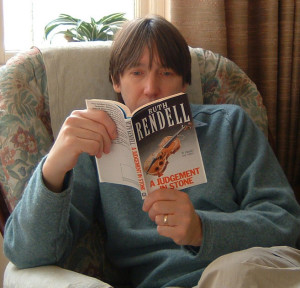 Over a period of ten years my art dominated the paperback editions of the Ruth Rendell novels when I painted an unprecedented forty plus covers for Arrow books in the UK. The first was in 1981 and I continued until 1990 when digital art increasingly began to take over from painted covers. Because I was working on the series for so long I occasionally illustrated the same title several times when it was reprinted. This was during a classic period of UK book cover illustration which has sadly vanished. When I first started illustrating the Ruth Rendell covers the author was not as popular as she later became and the publishers focus was to push the books and the author into the first division of crime writers and I was fortunate enough to have been part of that process.

I was largely given a completely free hand to produce the cover ideas for these books. The process was standard. I would read the novel and come up with a visual metaphor for the particular title, scribbling visual ideas in miniature until I was happy with the solution. I would then draw up what we then called a ‘rough’  which was sent to the art director and there would be further discussions, maybe alterations and then on approval I’d produce the finished illustration. Most of the cover images were painted in gouache with some of the later ones using acrylic paint, all on a rigid, smooth illustration board. The essential point to understand with these particular covers is that it was an intellectual task as well as an artistic one.Over my working time, I spent half my time reading the book and coming up with a visual metaphor cover idea and producing the final art. The covers included a number for the Wexford novels and with changes in regime and art directors, the art direction shifted towards a more explicitly crime chiller imagery.

I had to work within the restrictions of the clumsy typographic design of these times and a series of grey backgrounds which were less than sympathetic to the images. My art was often the filling in the sandwich! So it was a wonderful opportunity to be commissioned, over time, to illustrate three covers for the large format Wexford Omnibuses.  Some of  the originals were never returned to me – possible some of the best : An Unkindness of Ravens, From Doon With Death,  Lake of Darkness, Means of Evil, To Fear a Painted Devil and A Sleeping Life.  If anyone knows where they are or has copies of the original art, please contact me. I have tried to feature most of my printed covers but I will be adding some more including the ‘lost’ ones.

I hope you enjoy perusing the images and for those of you who bought the paperbacks in these years it will hopefully inform and bring back good memories. All the artwork is for sale and I’m always pleased to receive comments and questions.

Ruth Rendell, Baroness Rendell of Babergh, CBE (born 17 February 1930), who also writes under the pseudonym Barbara Vine, is an English crime writer, author of psychological thrillers and murder mysteries. In addition to police procedurals starring her most iconic creation, Chief Inspector Wexford, Rendell writes psychological crime novels exploring such themes as romantic obsession, misperceived communication, the impact of chance and coincidence, and the humanity of the criminals involved. Among such books are A Judgement In Stone, The Face of Trespass, Live Flesh, Talking to Strange Men, The Killing Doll, Going Wrong and Adam and Eve and Pinch Me.. Rendell is famous for her elegant prose and sharp insights into the human mind, as well as her ability to create cogent plots and characters. Rendell has also injected the social changes of the last 40 years into her work, bringing awareness to such issues as domestic violence and the change in the status of women. Rendell has received many awards for her writing, including the Silver, Gold, and Cartier Diamond Daggers from the Crime Writers’ Association, three Edgars from the Mystery Writers of America, The Arts Council National Book Awards, and The Sunday Times Literary Award. A number of her works have been adapted for film or television.